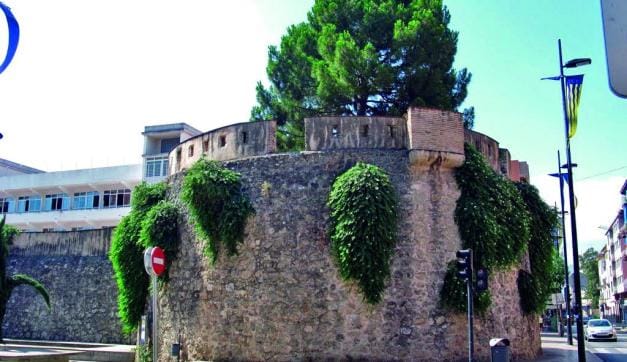 This fortified tower is one of the last witnesses of Gandia's old Medieval wall. The Torreón del Pino is one of the last remaining sections of Gandia's second wall, built in the 17th century. It was commissioned by Duke Francisco de Borgia in 1543. The tower was built on a circular layout and its purpose was mainly defensive. It's in Calle San Rafael, from where you can get a good idea of the enormous fortified monument. The courtyard of the Escuelas Pías is at the back of the tower.

The Torreón, named after the pine tree growing out of it, is one of the city's most distinctive and symbolic features. When the original pine tree died, another was planted in its place to preserve the view that the tower had provided for so many years. In addition to the tower, there are other remains of the old wall surrounding the dukedom of Gandia. The city walls were demolished in 1880 due to Gandia's increasing population. The city began to expand towards the south towards what is now Plaza del Prado. You can still see parts of the old wall in the historic centre of Gandia.

Some remaining sections can also be seen near the Palacio Ducal, along the River Serpis. More traces of the old wall were found in 1997. Some pottery fragments were also unearthed during the archaeological dig.

If you walk around the historic centre of Gandia and you look closely at the ground, in some places (like the top of the Paseo and on Calle San Francisco de Borgia) you'll come across small metal plates showing the old route followed by Gandia's Medieval wall.