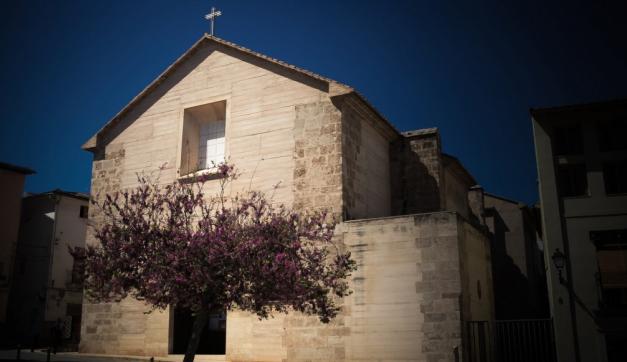 Iglesia de San Pedro (Saint Peter's Church) stands in the square named after it, in the old market quarter of the city of Xàtiva in the province of València. The church is thought to be one of the oldest in the city and for a long time, together with other churches, it was one of the city's three focal points for Christianity following the Christian conquest. It has been listed as an Asset of Cultural Interest since 1983.

The original church has been dated to just after the arrival of Jaime I of Aragón in 1244. The new church would be built in the 14th century. Leading figures such as Rodrigo de Borgia, who became Pope Alexander VI, were baptised here. The church depended on the Collegiate or Cathedral of Xàtiva, but in the 18th century, the Archbishop of València divided up the parishes of Xàtiva and they gained their independence from the Cathedral. However, in 1902 it lost its parish status and dropped down in category, becoming dependent once again on the Cathedral until it returned to being a parish in 1953. After the fire of Xàtiva in 1707, the church was restored in the Baroque style, the nave was lengthened, side chapels were built and the entrance door was changed, resulting in many of its Gothic features being lost or covered over.

It was listed as a Historic-Artistic Monument in the 20th century and restoration work took place from 1988 through to 1995. The work attempted to show the building's original Gothic features, which involved the removal of numerous 18th century additions, revealing the original polychrome coffered ceiling, with figures and heraldic shields and 16th century religious-themed wall paintings. Nevertheless, the Rococo covering has been left on the final section and the top of the nave to show what it would have looked like. This restoration work also uncovered 26 crypts underneath the church, tracing the whole of the church's history.