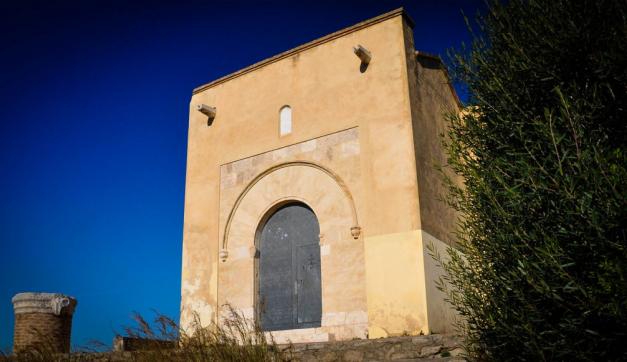 The Ermita de Santa Ana (Saint Anne's Chapel), in the municipality of La Llosa in Xàtiva, was built in the mid-16th century in the Flamboyant Gothic style. It was funded by the Borgia family and preserves the coats of arms of Xàtiva and València.

Its strategic location, on top of the mountain with the same name, gives its some amazing views and on clear days you can see all the way to the Desierto de Las Palmas nature reserve and El Benicadell. It's also said that King Jaime I saw the Castle of Xàtiva for the first time from this very spot.

One of the chapel's most striking features is its splendid blue-coloured dome covered with stars, restored by well-known painter Boix and providing the backdrop for all the commemorative events held to celebrate the year of the Borgias. The main features of the dome are the Borgia family coat of arms, the Virgin with Jesus, Saint Michael, the coat of arms of the city of Xàtiva and the crest of Aragón.

The current building dates back to the 16th century, although it is thought (but there is no documentary evidence) that there was a previous building on the same site in the 14th century, possibly prior to 1377. The only remaining trace of this building is a capital now housed in the ethnographic museum. It was built in 1456 by Cardinal Rodrigo de Borgia, imitating his uncle, Alfonso de Borgia, Pope Calixtus III, who had built a chapel to Saint Anne in La Seu in Xàtiva.