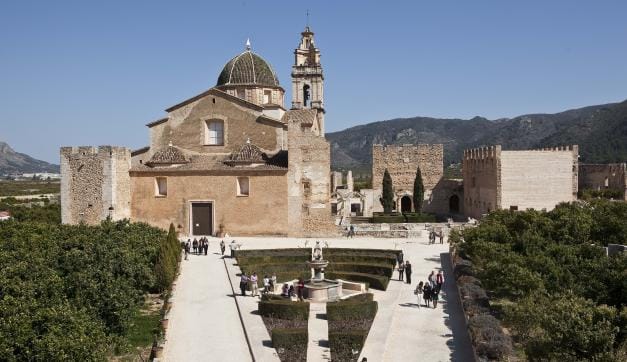 The Real Monasterio de Santa María de la Valldigna is in Simat de la Valldigna and was founded by King Jaime II of Aragón in 1298. Rodrigo de Borgia, Pope Alexander VI, and César de Borgia were both Abbots of this monastery.

In 1835, with the Mendizábal expropriation, the monastery was secularized and was abandoned by the monks and sold to private owners. The monastery became a private agriculture and livestock farm, leading to its assets being plundered and destroyed and most of the buildings demolished. In 2003 the Generalitat Valenciana (the València Regional Government) bought the monastery from the owners of the palace and in 2006 it was returned to its original location.

It was built in three stages. The first, in the 14th century Valencian Gothic style, formed the complete structure of the building around the cloister, while the second involved major renovation work after the severe damage inflicted. This was followed by the second renovation and definitive restoration, with complete replacements and new rooms, in the 17th and 18th century Baroque period, to which the current church and the chapel of the Virgen de Gracia belong.

The layout is based on the Cistercian model, with two nerve centres: the church and the cloister, around which the whole of monastery life revolved. The Cloister is the central element, connecting the various parts of the monastery together (refectory, kitchen, chapter hall, church, dormitory and scriptorium). Outside this monumental site is the Abbot's palace, built on the initiative of Abbot Arnau de Saranyó between the 14th and 16th centuries, the hostelry, cellar, warehouse and other farm buildings.

The church's distinctive feature is its high vaults richly decorated with paintings as well as a polychrome ceiling adorned with floral motifs and angels.