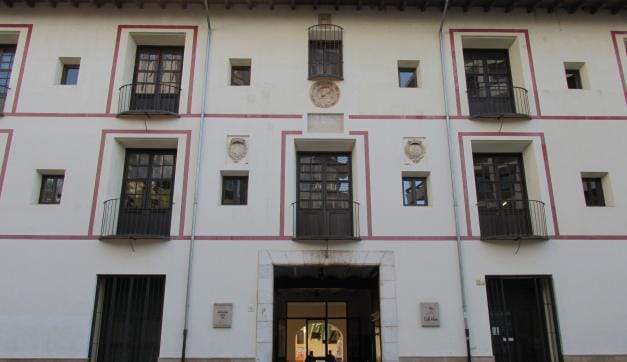 The Antigua Universidad, otherwise known as the Escuelas Pías, is one of the most important buildings in the Historic centre of Gandía and can be found in a square at the end of Gandía's Calle Mayor, the city's busiest shopping street. The Escuelas Pías building started life as the first university to be set up in Gandía and the world's first Jesuit university.

It was originally founded as a school by Duke Saint Francisco de Borgia in 1549. It was converted into a university following a papal bull issued by Pope Paul III and a privilege granted by King Charles V of Spain. The Escuelas Pías, now also known as the Antigua Universidad, were donated to the Society of Jesus (whose members are known as Jesuits). For several centuries the university was one of the most important centres of its kind in the area. University classes were taught there to leading figures of the period until the Jesuits were expelled from Spanish soil in 1767.

This led to the closure of Gandía's university. During the decades that followed, the building was used for other activities. Finally, in 1806, the Antigua Universidad came under the ownership of the Escolapios (also known as the Piarists). The Escolapios brought teaching back to the Escuelas Pías, although not at university level, and they still do so today.

The Antigua Universidad had cells, refectories, a sick bay, various offices, classrooms and a church. The Escuelas Pías building had a passageway or secret tunnel, part of which still survives but is not open to the public, connecting it to another one of Gandía's iconic buildings. The Antigua Universidad, built in the Renaissance style, has a large inner courtyard now used as the school playground. On the courtyard wall you can see bas-reliefs dedicated to Saint Francis Borgia.

It was listed as an Property of Cultural Interest in 1977.