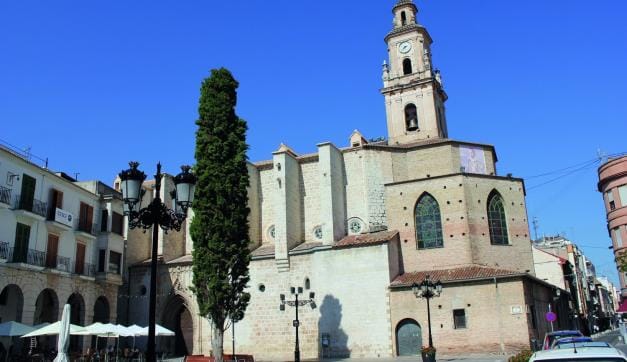 The building was listed as an Propertyof Cultural Interest in 1931 and is one of Gandia's most important cultural attractions. This Collegiate church was built between the 14th and 16th centuries in the Catalan-Aragonese Gothic style.

La Colegiata de Santa María is in the historic centre of Gandia, in Plaza de la Constitución next to the City Hall. This area is a perfect reference point for both tourists and local citizens. It has various shops as well as religious and public administration buildings.

The Collegiate church was built in the time of Alfonso el Viejo during the 14th and 15th centuries on the site of a Muslim mosque. Some of the remains of the mosque can be seen on the left of the high altar in the Collegiate church of Gandía (there is a large glass viewing panel in the floor over a section of the old walls).

During the 16th century under the patronage of Duchess María Enríquez, the church was extended to add four additional sections, resulting in the layout you see today. It was granted the status of Collegiate Church by a papal bull issued by Pope Alexander VI on 26th October 1499. During the years of the Spanish Civil War, many famous art treasures were lost and the square presbytery was destroyed, to be replaced subsequently by a polygonal Neo-Gothic presbytery. Restoration work began in the 1940s.

At the Apostles' door are bas-reliefs of the Borgia and Enríquez families' coats of arms.

The Collegiate church bell tower can be seen from almost everywhere in the city and was used as a reference point during building work on the road running into Gandía from the beach.

The Collegiate Church of Gandía is the starting point for most of the processions taking place during religious events and festivals in the city. To the right of the main door (the side entrance leading out onto the square) is another smaller door. Several times a month, Gandía's buñoleras cook and sell their freshly made buñuelos (dough fritters). The money collected is used to fund social projects. There are also street markets and other food is sold several times a year for the same purpose.

The great House of Borgia in Gandía