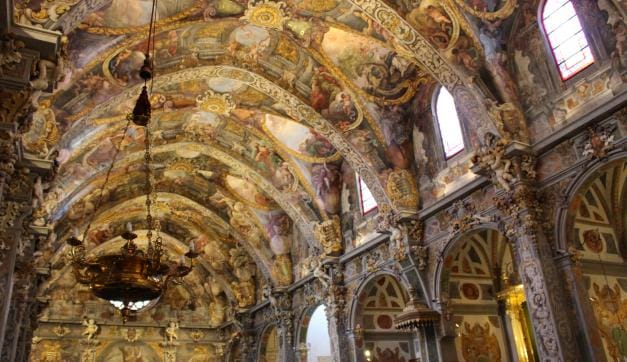 The Iglesia de San Nicolás de Bari y San Pedro Mártir is a parish church in the historic centre of the city of València. The church was built in the Gothic style in the 15th century and has a spectacular 17th century Baroque decoration. It was listed as a National Historic and Artistic Monument in 1981.

At first it was an Early Christian church until the Muslims arrived in the 8th century, when a mosque was built in its place facing Mecca. With the conquest of València by King Jaime I of Aragón, the mosque was consecrated as a Christian parish church and donated to the Dominican Order, who named it in honour of Saint Nicholas of Bari (otherwise known as Saint Nicholas of Myra). Years later the same order added another title saint to the parish church, Saint Peter Martyr (otherwise known as Saint Peter of Verona), the first martyr of the Dominican Order.

In the Golden Age, the church of Saint Nicholas was linked with important figures such as writer Jaume Roig, who was the parish administrator, and Alfonso de Borgia, the future Pope Calixtus III. During this century the church was rebuilt and extended, turning it into a fully Gothic building. The extension work was done under the rectorship of Alfonso de Borgia, who was rector of the parish from 1419 and later Bishop of València, Cardinal and finally appointed Pope Calixtus III.

The building consists of a single nave with six sections, fairly shallow chapels between the buttresses, a polygonal prebystery preceded by a straight east-facing section and simple rib vaulted ceilings.

In 2016 the latest restoration work carried out on the church was unveiled, funded by the patronage of the Hortensia Herrero Foundation. Following the restoration it has become popularly known as València's Sistine Chapel.

Its popularity has made it an essential tourist attraction for anyone visiting the city. To accommodate visitors, the parish church has one timetable for worship and prayer and another for cultural and tourist visits.