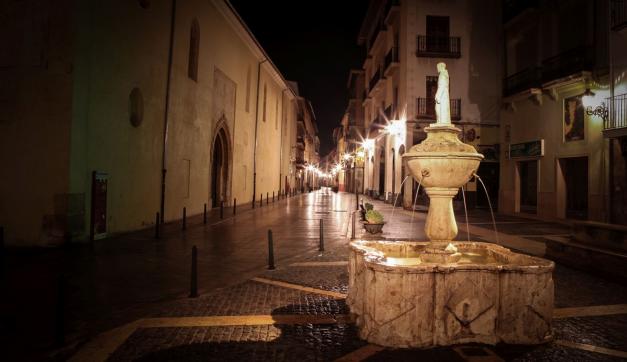 Iglesia de San Francisco, also known as Antiguo Convento de San Francisco (Old Convent of Saint Francisco), is in the city of Xàtiva in the province of València. It has been listed as an Asset of Cultural Interest since 1981.

This Cistercian Gothic style church was built in the second half of the 14th century and was part of the now disappeared Franciscan convent. It consists of a single nave with seven ribbed vaulted side chapels. One of the gates in the nearby surrounding wall was named after the church. The church's closeness to the palaces owned by the nobility that accompanied King Jaime I in the conquest of the city meant that it became a pantheon for the most illustrious families, like the Borgias.

The convent site was affected by the fire that swept across the city in the early 18th century and was refurbished and extended as a result of the damage. The cladding with pilasters and the barrel vaulting with lunettes date from this period.

With the expropriation of 1835, the building passed into the hands of the Ministry of War, which converted it into a cavalry barracks. In 1936 it was destroyed, turned into a warehouse and then into a cinema. After some years of neglect, it was sold at auction and demolished in 1960, leaving only the church standing. A series of restoration works took place from 2006 onwards resulted in the building being used once again. The church was also restored at that time so that services could be held there.