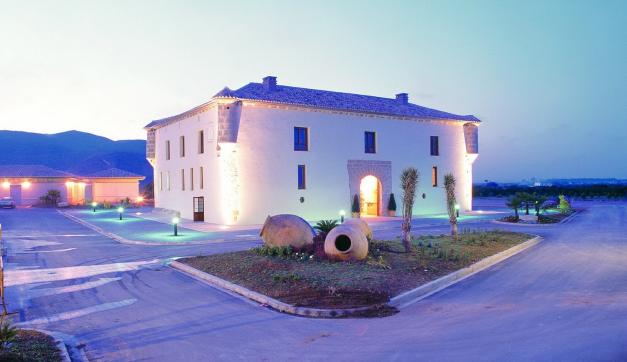 A fortified Medieval farmhouse with three embrasures and a watchtower on each corner. The building was acquired by Alfonso de Borgia y Castro, youngest son of Francisco de Borgia. It was built during the 14th century and was the summer residence of the Royal Dukes, converted into a stately home for recreation and hunting.

The owners occupied the upper floor. The rooms were decorated with luxury materials. There was also a large salon and an oratory. The servants lived on the ground floor, which consisted of the kitchen, well, grain store, storehouse, etc. Alquería del Duc is a fortified building. The upper parts of all four corners still preserve their embrasures and watchtowers.

From the outside you can see the restored façade, which has been left in its original state in some areas. For example, the arched entrance (main doorway) is still in its original condition. One of the sides of the building has a sundial clock dating from 1780. Duchess Doña Juana Fernández de Córdoba hosted Empress Margarita of Austria for an evening meal at Alquería del Duc while the latter was visiting Gandía (1666). Some seventeen exquisite dishes were served.

Nowadays, this iconic building is used for giving cookery classes and for other tourism events. Because of this, the Alquería del Duc in Gandía is also known as Centro de Turismo l'Alqueria del Duc (Alquería del Duc Tourism Centre). There are various centres like this one across the Comunitat Valenciana. They're used for Vocational Training and Continuing Education courses. The courses are aimed at employed and unemployed people over the age of 16 who want to improve their skills and knowledge of the tourism industry.