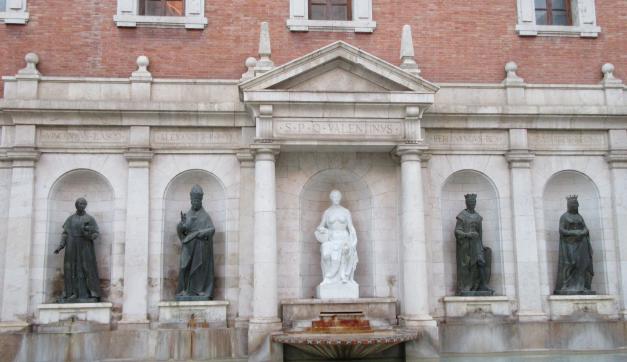 The University of València was founded in 1499 under the name of Estudi General, and its purpose was to unify the various higher education centres around València in one single location.

The university was set up under an initiative by the City Council. They were responsible for acquiring estates and houses for council use as well as drawing up the statutes for granting academic qualifications. The university's first main headquarters was in the building known today as La Nave and was occupied by the faculties of Theology, Arts, Philosophy, Medicine and Law.

With the logistics and administration in place, only the licences for starting up activities were missing. The courts and the Archbishop of València, Pedro Luis de Borgia, nephew of Pope Alexander VI, approached the Pope, a member of the Borgia family, to secure the Papal Bull recognising the new university and authorising the Archbishop of València to award graduate and doctoral qualifications on behalf of the papal authority.

La Nave is an example of València Neoclassic architecture, especially the façades and the cloisters. The building suffered significant damage during the bombing of the city in 1812. Restoration work was slowly carried out over the course of the 19th century. Its current architectural configuration is the result of a series of interventions put in place to adapt the building to suit its different needs and purposes. One of the building's striking features is its Renaissance cloisters.

Nowadays, the University's academic activity takes place in the faculties and schools spread across its three campuses, as well as in the various research institutes dotted around the city of València. The historic building is home to the Historic Library, the Rector's offices and a number of administrative, bureaucratic and cultural services.