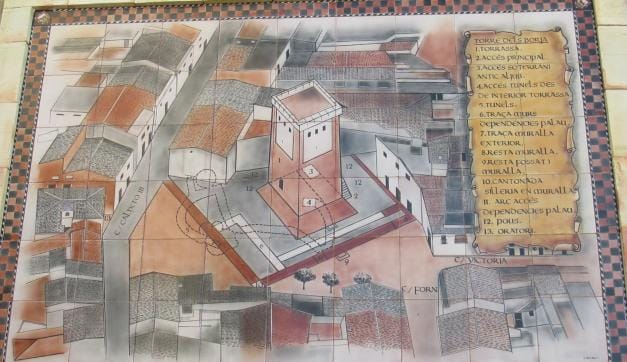 The Torreón de los Borgia (the Borgia Watchtower) is in the Valencian town of Canals. It has been listed as an Asset of Cultural Interest since 2000.

Based on the remains uncovered, the building has been dated to the 13th century, during the Muslim era. Following the Reconquest, the fortification was at first neglected and unused, but in the 14th century a Gothic palace was built reusing the Muslim tower and part of the wall. The palace belonged to the Borgia family, who held the Baronage of the Tower. Alfonso de Borgia, the future Pope Calixtus III, was one of the family members to be born in this building.

In 1506 it was sold, together with the Baronage, to Xàtiva City Council. The council retained ownership of the building over the centuries that followed, and the palace gradually fell into ruin. In 1758 it needed restoration work. In 1847 the building, once again in ruins, was sold by Xàtiva City Council to various private buyers. The tower was finally acquired by Canals Town Council and in 1994 the Conselleria (Regional Ministry) restored it, removing the buildings that had gradually been attached to the tower over the years.

The tower is built on a square layout and has three floors, although the top floor was demolished in the 19th century. The original entrance was via a semi-circular stone archway on the first floor, which was the usual access route to defence towers as this meant access to them could be sealed off by simply pulling up the ladder that led to the doorway. Nowadays, entrance to the tower is via a metal staircase to the first floor. It’s built entirely of stone and masonry. The first and second floors are open to the outside via arrow holes and the top floor has a large chamber with three rectangular windows. The terrace is accessible and still preserves the defensive parapet with battlements.