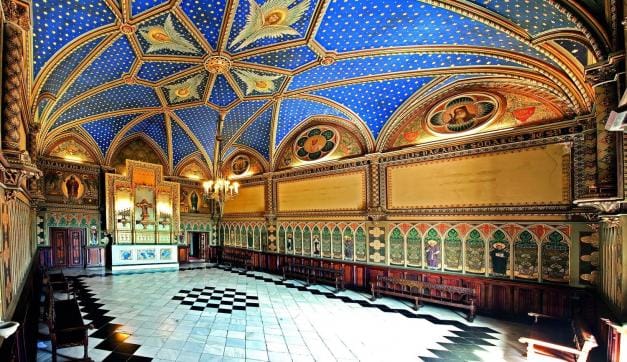 The Borgia family's Palacio Ducal in Gandía, listed as an Asset of Cultural Interest since 1964, is one of the most iconic civic buildings in València's historic heritage. Set in the heart of the historic city centre, alongside the Collegiate Church of Santa María and the City Hall, it has witnessed the changing history of the capital of La Safor practically since its foundation.

The austere outside of the Palace is in contrast with the amazing interior that successive inhabitants have been transforming throughout its history, turning the Palacio Ducal into a container for a huge variety of different artistic styles ranging from the 15th to the 19th century.

In terms of the rooms, the most interesting are the Salón de Coronas (Room of Crowns), built in the 16th century by Saint Francisco de Borgia, the Oratorio del Santo (Saint's Oratory), with additional 19th century Neo-Gothic features, and the impressive Galería Dorada (Golden Gallery), built in the early 18th century to commemorate the canonisation of the fourth Duke of Gandía.

The highest point in Gandía, known as the “Tossal”, was chosen for the building and Alfonso el Viejo (the Old), first Royal Duke of Gandía, took charge of defining the architectural plans for the Palace in the Medieval era.

With the arrival of the Borgia family following the purchase of the dukedom of Gandía by Cardinal Rodrigo de Borgia, the building was extended and modified. In the Baroque era, the Duke and Duchess of Borgia gave the building a new lease of life by refurbishing the Salón de Águilas (Eagles Room) and building the Galería Dorada to commemorate the canonisation of Francisco de Borgia.

After the death of the eleventh Duke of Borgia with no descendants, both the dukedom and the building passed into the hands of noble families. For almost a century the building remained abandoned, until in 1890 the Society of Jesus acquired it at public auction.

Only part of the Palace is open to visitors, with the other part being a school and private residence for the Jesuits. Areas open to visitors include the inner courtyard, the Salón de Coronas and the Galería Dorada.