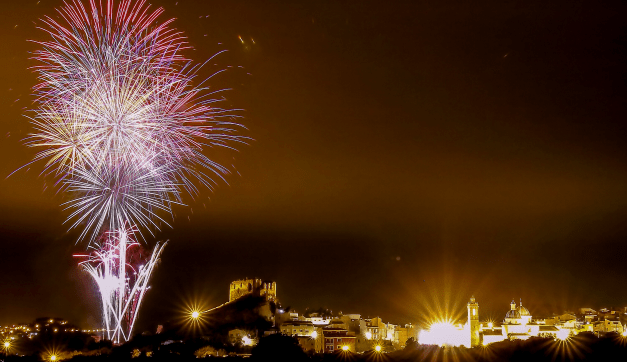 The castle of Castellnovo had its heyday in the mid-15th century, when it became the property of Beatriz de Borgia, sister of Rodrigo Borgia, future Pope Alexander VI, and niece of Pope Calixtus III. She turned the castle into a palace with a beautiful Renaissance appearance, as a show of ostentation, distinction and power.

The origins of the castle are thought to be Roman, part of the Segorbe network of defences. The castle was rebuilt on the site of the previous building during the Muslim occupation, which is how it got its name of "Castellnovo" or new castle, now also the name of the town. Halfway through 1233 it was conquered by troops led by King Jaime I and was later granted to nobleman Berenguer d´Entença, who remained its owner until the late 13th century.

The relationship between the Barony of Castellnovo and papal Rome meant that it was one of the first example of the new iconography of Spanish Renaissance in València.

It was a new way of understanding space, an innovative form of architectural expression possible inspired by Italian architecture in Rome. The castle's formal composition includes austere plain vaulting with no decorative elements or moulding, with no spatial mathematical relations or architectural orders.

The castle was a display of the new taste. The ceilings in each of the bedrooms feature handkerchief vaulting, rib vaulting, domes on one or several corner arches, barrel vaulting and rib vaulting on wall rib arches, with a wide variety of different ceilings depending on the room.

It gives the impression that the building is an example of the new types of ceiling used in countries where the Renaissance tradition had begun more than a hundred years earlier.

This new design, together with the distinctive way of acting on pre-existing architecture and opening up onto the landscape, forcing views that emphasise the uniqueness of the location, a hill surrounded by an extensive valley, and creating landscaped areas where there were once surrounding roads, made it different from all the other buildings in the area.