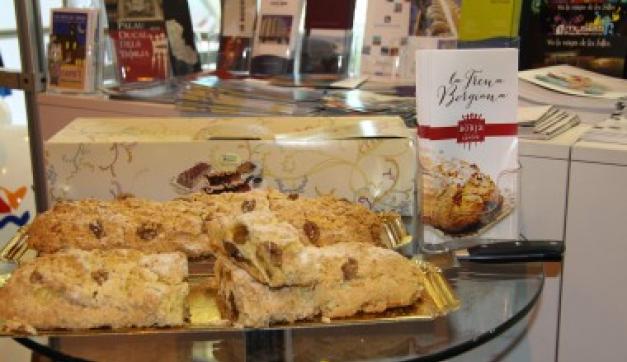 The Borgia plait is a sweet pastry traditionally made in the city of Gandía, consisting of finely chopped almonds and sweet "angel's hair" pumpkin.

In the Middle Ages the wealth of emerging cities was measured not so much in gold but in terms of the local products they could sell. Back then, one of the most precious commodities was sugar, an exotic and costly ingredient.

This was the era in which the Dukedom of Gandía began to flourish under the leadership of the Borgia family and the city became known as "Gandía the sweet" for its high sugar cane production. Another of the products that promised riches and culinary value were nuts like almonds and walnuts.

Although in the rest of the region sugar and almonds were select, exclusive products, in this area they were relatively affordable for the upper classes, so by combining the two a sweet treat was created that's now known as the Borgia Plait. This sweet pastry looks easy to make but it was very popular in its time because, as we described earlier, it combined sugar, very finely chopped almonds and "angel's hair" sweet pumpkin, plus walnuts and other dried fruits such as raisins and then sprinkled with more sugar to give it a candied appearance.

For 500 years the recipe was handed down from parents to children for eating at home, until in 1840, the Pastelería Raúl company decided to sell the pastry that's known today as La Trenza Borgiana (The Borgia Plait).