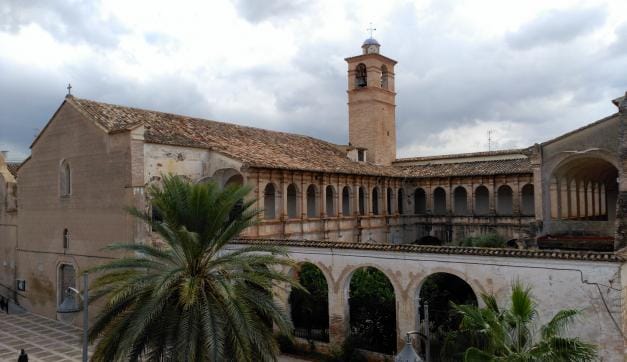 The Iglesia de Santa Cruz is in Plaza de la Iglesia in Llombai. The monument has been listed as an Asset of Cultural Interest since 1982.

The old church was founded by Bishop Ramón Gastó in 1329 and was dedicated to the Santos Juanes. The church became part of the Dominican convent by papal bull issued by Pope Paul III. The convent was a donation from Francisco de Borgia, first Marquis of Llombay​, to commemorate his marriage to Leonor de Castro. The building was completed in 1548.

In 2010 restoration work was carried out on the dome of the Communion Chapel, the façade, the choir chapel and the three church bells.

The church is Gothic in style, with a single nave, with neither dome nor transept, with pointed arches and rib vaulting, the true style of Valencian Gothic churches, with a main chapel at the high altar and eight side chapels, a spacious high choir and bell tower. The Communion Chapel, or San Francisco de Borgia chapel, was built in 1671 to mark the canonisation of Francisco de Borgia by Pope Clement XI.

The church houses some real art treasures, including the Gothic style image of the Virgin of the Rosary, a gift from Francisco de Borgia. There is also a Lignum Crucis in embossed silver, also a gift to the convent from Francisco de Borgia. Visitors can also see a large wood panel with the Santos Juanes, attributed to the Juan de Juanes school, plus a canvas of Saint Dominic and Saint Catherine of Siena. Other pieces include an image of Saint Vicente Ferrer by Ignacio Vergara another clothed image with an expressive face, attributed to José Esteve; plus there is a small 17th century image of Saint Dominic by an anonymous artist. The reliquary is silver, and contains a famous relic of Saint Francisco de Borgia dating from the 18th century. In the choir there is a fresco by an anonymous artist portraying Saint Dominic de Guzmán and dating from 1663.