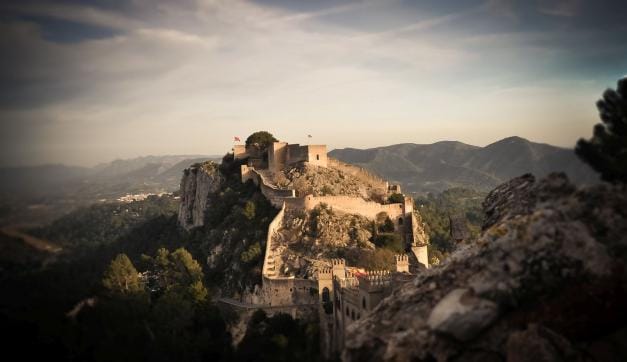 A double fortress stretching over almost 1 kilometre in the Sierra del Castell overlooking Xàtiva. The city’s strategic location has made it both a setting and a witness in numerous conflicts. The castle is divided into Castell Menor and Castell Major, with the latter built on the site of Iberian and Roman remains. It was extended and fortified by the succession of cultures that settled in this area. It was already famous during Hannibal's campaigns, and in the period of Al-Andalus. Later, it was an important site in the era of the Kingdom of València, in the wars with Castile, in the Germanías wars and in the war of Succession, as well as serving as a jail for condemned prisoners.

The Castell Menor is the oldest part of the castle, dating back to Iberian and Roman times. The tour of Castell Menor evokes legends about Iberian princess Himilce, Hannibal's wife, and the war he waged against Rome. It's said that Himilce had a child by the Carthaginian general here in 218 B.C. From its strategic position it could control the Via Augusta, so it witnessed Hannibal's campaigns as well as those of Roman commanders Scipio and Sertorius.

The Castell Major stands to the right of the Plaza de Armas (parade ground). it was built in the Medieval period and is the largest and best-preserved part. It has impressive walls and faces east. Following the Christian conquest by King Jaime I, it became the main defensive fortress on the road between Castile and the capital of the Kingdom of València. In the Castell Major you'll find spaces and rooms where everyday life in the fortress can be recreated. These include entrances, watchtowers, water storage for the guards, chapel and prison cells where some of the castle's famous prisoners were locked up, including Diego de Borgia, great‑grandson of pope Alexander VI, for the murder of the Duke of Segorbe's son.

One of the rooms in the Castell Major is currently hosting an exhibition on the Borgia family.