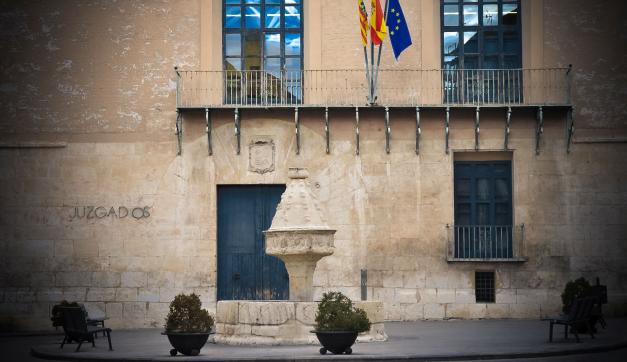 The Fuente Real de la Trinidad (Royal Trinidad Fountain), a historic ornamental fountain, was built in the 15th century when Pope Calixtus III was just a boy. It's in Plaça de la Trinitat in Xàtiva and is listed as an Asset of Local Importance.

The Fuente Real de la Trinidad is topped with an 8-sided pyramid structure and stands in the square named after it. It's one of the most charming spots in the old quarter of the city. The fountain was built in 1403, although official information about it was lost when fire broke out in the city archive back in 1707. It was restored in the 18th century and in the 1980s it became part of the city's Artistic and Historic Heritage.

The fountain has served as a model for constructing other later fountains. It consists of an octagonal shaped basin, at the centre of which is a prism-shaped column. This opens up to form the lower part of the bowl, which is decorated with relief tracery and is separated from the tambour by moulding. The tambour is also octagonal and the crests of Xàtiva and Aragón can be seen on the sides. The top of the fountain is a pyramid decorated with a crochet style pattern and nowadays present it's topped with a small vase in place of the original image of Saint Lucia.

The pipes are fitted inside this space and water pours permanently from them, supplied via pipes leading from the Manantial de Bellús spring. The action of the water has eroded ridges in the stone and removed the polychrome decoration that was once visible on the fountain.

This fountain is thought to be the oldest not only in the city but also across the region of València, as well as being one of the few Gothic style fountains left in Spain.