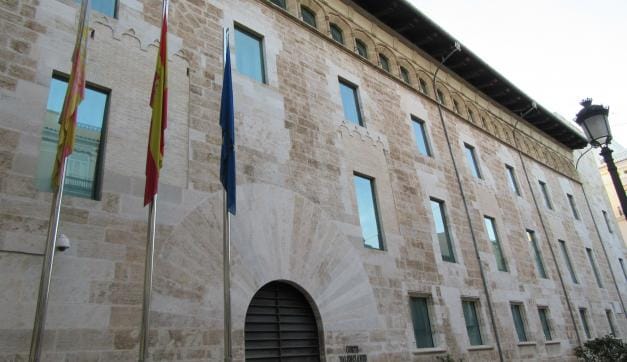 The Palacio de los Borgia, also known as Palacio de Benicarló, is in Plaza de San Lorenzo in the city of València. This aristocratic mansion was built in the Valencian Gothic and Renaissance style. Nowadays, it's the Valencian Parliament Building. It has been listed as an Asset of Cultural Interest since 1931.

The palace was built in the 15th century as a residence for the Borgia family, occupying the site of the school of Art and Grammar. It was commissioned by Pedro Luis de Borgia, first Duke of Gandía and son of Pope Alexander VI. The building is a combination of the Gothic and the Renaissance styles.

The palace was owned by various important families throughout its history, first by the Borgia family from 1485. It was abandoned by the Duke of Gandía in the mid-18th century and fell into ruin. The palace then belonged to the House of Benavente and lastly to the House of Osuna, until in the mid-19th century it was sold to the Count of Benicarló.

The main feature of the palace is its wide façade with a tower at one end standing slightly taller than the rest of the building. The palace underwent many refurbishments, although the Gothic features can still be seen in the doorway with its semi-circular arch the "loggia" or gallery of windows with mixtilinear arches on the top floor. A set of wooden eaves runs above this series of windows. Inside, the design of the rooms ranges from Gothic and Neoclassic through to Modernist.