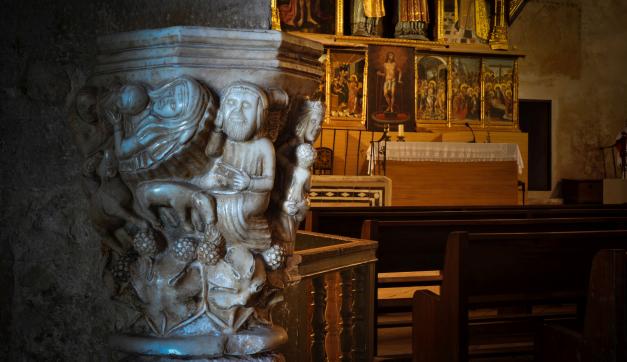 Sant Feliu (Saint Felix) is one of the oldest churches in the Reino de Valencia (Kingdom of València). It was built in 1265 following the Christian conquest of Jaime I, coinciding with the spread of the Gothic style across the València region. The church is on the slopes beneath Xàtiva castle. It was built over the remains of the old Visigoth cathedral.

The north-facing atrium of columns takes up the entire side wall of the church. It is supported by six marble columns from old Roman buildings, some with the characteristic pink colour of the nearby Buixcarró quarries. Curiously, each one is different from the rest.

The Romanesque doorway is one of the few examples of this architectural style found in the València region. Since the Christian conquest led by Jaime I coincided with the expansion of the Gothic style, it's all the more striking for this reason.

The font in Sant Feliu, containing holy water, is another one of the church's main features. It is Romanesque in style and depicts scenes from the Nativity and the Adoration of the shepherds. The font has floral motifs around the base. You can also see traces of the original polychrome decoration.

The church walls were whitewashed, concealing valuable mural paintings dating back to the first half of the 14th century. The paintings have been partly restored and form the largest set of Medieval early Gothic style paintings preserved in the Comunitat Valenciana. To the left of the main altarpiece is the Saint Nicholas of Bari altarpiece. There is also a Saint Christopher and a Calvary in the second chapel on the Epistle side.

The most outstanding item inside Sant Feliu is the impressive Gothic altarpiece on the high altar, dating from the early 15th century. It contains 27 paintings on wood panels, arranged in three sections, predella and cornice, plus two sculptures dedicated to Sant Feliu of Girona and Sant Félix of Lyon.

The altarpiece is a faithful reflection of its era, still linked to the Gothic style but with hints of the new Renaissance language. It was commissioned in the early 15th century by the jurats, municipal magistrates. This is the reason why it shows the city's coat of arms and the Royal crest of the Crown of Aragon.

It's also thought that both Calixtus III and Alexander VI celebrated mass here when they lived in the city before becoming Popes.